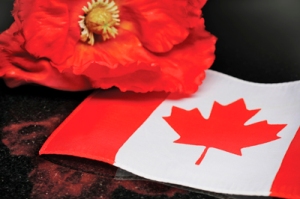 On November 11th Canada will remember its fallen servicemen and servicewomen. They made the ultimate sacrifice because they believed in this country. They deserve to be remembered.

If you’re in job search mode as you read this, or expect to be, try to remember that what this country is reflects the contribution of everyone who lives and works here. No one person, corporation or political party can take credit for having built this country alone. It took the collective commitment, determination, imagination, creativity, energy, dedication, talent, genius and knowledge of those who came before us. And that will never stop. It mustn’t stop.

Take the time to get to know as much about this place as you can during your search. It is, after all, the second largest country on the planet and consistently ranks among the best in the world in which to live. Tell yourself, your children, maybe even your grandchildren, that we’re about more than large corporations and skylines “dominated by skyscrapers with the logos of banks, international consulting firms … and the like”, as Bruce Stewart put it in his post on October 26th.

Remind them that corporations are made up of individual people who do great things. (Remember when we used to be people instead of “talent” or “human resources”?) Great things happen in small businesses, too. And in a very real sense, every one of us is an entrepreneur.

While you’re at it, familiarize yourself with Applicant Tracking Systems and how they work. Then find out who uses them. ATS’s as they’re also known were conceived to make it easier to handle the tsunamis of e-mails with résumés attached that deluge large corporations by screening out those that don’t contain the “keywords of the day”.

Some software manufacturers claim to be able to drill down through multiple layers of information in résumés to help them make better assessments of prospective candidates. They’re dumbing down the process by being the answer to the prayers of managers who don’t enjoy recruiting enough to think about what recruiting is. They lack the imagination to see and understand between the lines because the software makes sure they never see let alone read the lines. That’s where you’ll find the occasional or not so occasional diamonds in the rough who are often the difference between truly remarkable companies and truly mediocre ones.

The Personal Due Diligence Project knows a few things about diamonds in the rough and how much we need them. The large corporation’s loss will be the small business’s gain. Happily, more people are now working for small business than for big business. Small business is creating more employment opportunities than big business. Something to keep in mind.

We may be the second largest country on the planet, but we aren’t alone on it. When it comes to creativity and ingenuity, you don’t have to take a backseat to anyone. You may have to go that extra mile (1.61 kilometres) to prove it, but you and Canada are worth it.