The twenty IBM sales recruits sporting three-piece, dark blue suits with sincere tie, long-sleeved-button-down-collar white shirt and wingtip shoes (brogues) had just learned that we had left the letters on the nameplates in front of us undisturbed for three days, two days longer than normal. Bob Oliver from L.A. became Bobo Liver. Boys will be boys. 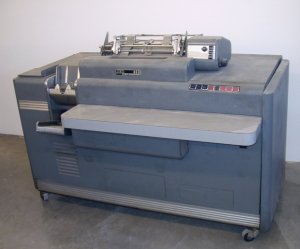 The “big blue machine in the corner”

The morning’s delivery of doughnuts and various and sundry hot and cold beverages from the nearby bakery in Princeton, New Jersey was sitting on the “big blue machine in the corner”, an IBM 80-column-card-based 403. We were about to learn how the company’s compensation plan worked.

After what was left of the day’s doughnuts had been cleared away, our instructor asked each of us what kind of car we were driving. Anything less than a Mercedes-Benz would have to be upgraded. Keeping up our car payments would be the incentive to exceed quota. But he assured us that with time, we’d be earning more than enough to make the Benz affordable.

The 2015 that Robert Zemeckis envisioned in the 1989 sci-fi movie Back to the Future Part II makes no mention of precarious employment nor of the corporate victory over labour. Neither did IBM in the late 1960s because, back then, no one saw it coming. But it’s here now and it’s impacting on developed and developing countries as this is being written. You can read about the consequences to date in the PEPSO report entitled It’s More than Poverty.

As in most crises or gathering crises of this kind, there’s much discussion about research into the problem, but very little about action. People are at risk and are suffering now. We’re especially concerned about whether parents are factoring this new reality into their plans to invest in post-secondary education for their children, or ignoring it.

As parents in our own right, the position of the Personal Due Diligence Project is that parents must be strategic and pre-emptive in how they approach preparing their children to support themselves. We’ve already begun a survey of parental attitudes about higher education and the extent of their understanding of the implications of just-in-time work.

Not every employer subscribes to this madness. There will be no winners as a result of precarious employment. Driving down the buying power of working people will drive down the demand for the goods and services their employers provide. A farmer looking for ways of conserving money in hard times hit on the idea of cutting back on the quantity of oats he fed to the horse that pulled his wagon. On the day he reduced the quantity to zero, the horse died of starvation.

No one involved with the Personal Due Diligence Project is a Luddite. Far from it. But what we do understand is that machines crave nothing, demand nothing and buy nothing.

As for our governments and business leaders, it wouldn’t surprise us if some bright young bureaucrat came up with the idea of granting unemployed and underemployed Canadians title to 10 acres of land, a horse, some oats and a plow.